ABSTRACT:
How can minarets and tulips be part of building nostalgia? Traces of empires are often evident over large swathes of land long after the eclipse of imperial power, whether serving as a substrate of later developments, lingering as an indelible scar, or re-emerging as atavisms over time. Among the longest-lasting yet least studied in terms of its contemporary legacy is the Ottoman empire and the vast array of cities it comprised, from Budapest to Baghdad. Ripe for contestation, motifs that draw on Ottoman heritage – from mosque flourishes to floral tiles – have been mobilized in the service of divergent visions for development as they rebuild the urban realm. This manuscript is concerned with how Ottoman legacies are reinvented differentially in recent urban regeneration, and how these efforts matter for nostalgic development trajectories. Istanbul and Beirut serve as useful contrasts exhibiting sharp differences in the formulation and affect of post-Ottoman urban aesthetics. Drawing on fieldwork in Turkey and Lebanon carried out since 2008, I show how geopolitical positioning and developmental aspirations frame the highlighting, embellishment, and transformation of Ottoman features within efforts to remake post-Ottoman cities, but in vastly different ways in these two cases. I identify divergent forms of building nostalgia, which rely heavily on aesthetics as a trove of significations, becoming a field of struggle over urban meanings and mundane connections. In Istanbul, among the many fields where this can be observed, one of the most visible, contentious, and enduring engagements with the Ottoman past is the effort to remake urban places: redeveloping or replacing buildings, public spaces, and neighborhoods in ways that reinvent imperial legacies. I contend this is an exaggerated aesthetics, with strong, often heavy- handed yet contested political content. Yet the once-provincial Ottoman capital of Beirut, Lebanon, is an instructive comparative case of contemporary redevelopment. There, Ottoman vestiges are abundant, yet Turkish references are downplayed or altogether effaced by urbanists, developers, and politicians. Instead, elements of the Ottoman period are used to convey both cosmopolitanism in the wake of the devastating Lebanese civil war (1975-1991) and the depth of local urban history in direct contrast to other Arab cities that have recently emerged as spectacles of instant urbanism. This, I argue, is a kind of recoded aesthetics, which often maintains Ottoman cues, but with such distinct projections of meaning and resonance in the contemporary Beiruti context that only observers with a decent sense of architectural periodization would likely be able to apprehend them as in any way “Ottoman.” The focus on different orientations and outcomes across these cities enables us to see the Ottoman legacy as robust and formative; yet rather than monolithic, it proves to be a malleable symbolic repertoire with particularly divergent geographical bearings.


BIO:
Dr Centner is a sociologist, a geographer, an urbanist, and a development scholar whose diverse research portfolio revolves around a core interest in urban transformation at the nexus of social, spatial, and economic change. Before joining the LSE, he was faculty in the Department of Sociology at Tufts University; he received his PhD from the University of California, Berkeley, and has had visiting affiliations in Buenos Aires, Cape Town, Irvine, Los Angeles, and Paris. He is currently the Chair of the Urban Geography Research Group of the Royal Geographical Society. 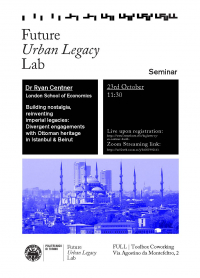